A colleague recently commented on one of my pull requests that I had left unnecessary trailing commas scattered around code after refactoring. She was not aware of their intention, hence this article exists. These commas were left in the code deliberately and by design.

What once used to be a syntax error is now a feature. Check out What’s new in Kotlin 1.4.

These commas do not change the program’s behaviour in any way—they are just syntactic sugar. The program compiles to the same bytecode with or without the trailing comma. But this seemingly insignificant feature comes with a few not so obvious quality-of-life improvements. 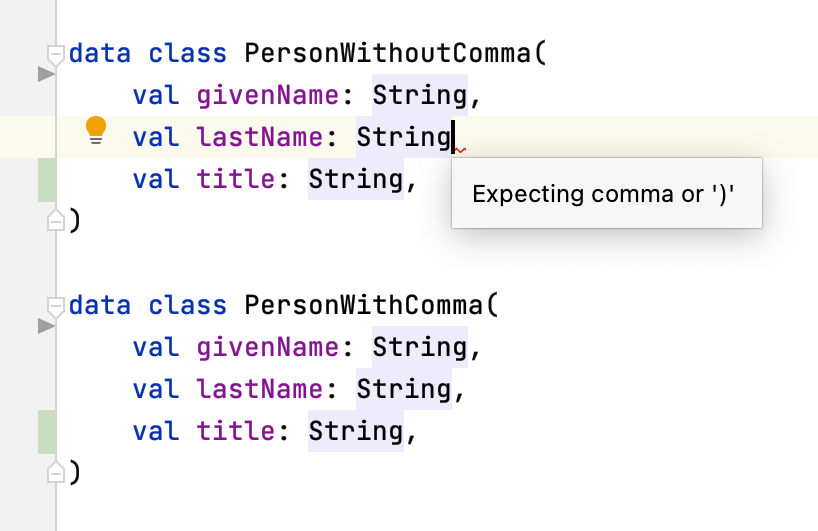 Trailing comma particularly excels in code reviews. Utilizing trailing commas leads to more concise code changes. As a result, it becomes faster to scan the code and realize that there was only a single line added and a single line removed:

rather than having to mentally filter out unnecessary comma juggling in unrelated lines:

In my opinion, the greatest benefit of using a trailing comma is that it prevents a very common type of merge conflict. To give a trivial example, let’s have a look at what may happen when we try to merge two branches (or rebase one on top of another) with a single commit each:

With a trailing comma, we are presented with a clean set of addition and deletions that do not interfere with each other.

But without a trailing comma, we are presented with a dreaded conflict that we have to resolve manually.

This conflict occurred because we removed a comma from the lastName parameter although all we intended was just to remove the isActive parameter instead. Sure enough, we can quickly resolve this trivial example using the magic wand button in the gutter, but it is not hard to imagine a situation where the changes are intertwined with other commits, in which case the magic wand becomes no longer available.